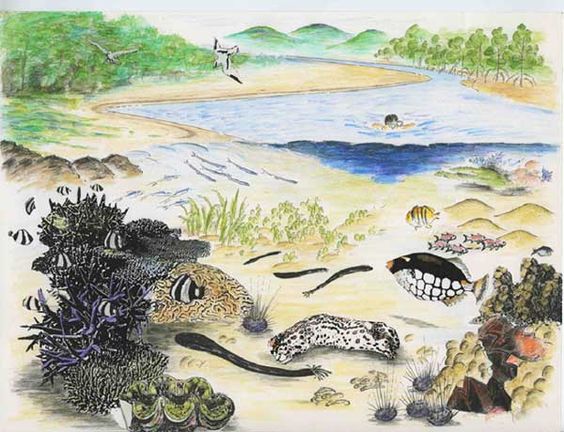 Biological diversity (biodiversity) is the occurrence of different types of ecosystems, different species of organisms with the whole range of their variants and genes adapted to different climates and environments along with their interactions and processes. The term “biodiversity” is useful shorthand for all the life forms on earth – from the great elephants and whales to the tiniest frog, from towering trees to the microscopic fungi in the soil that help these trees get the nutrition they need to live and to grow; Biodiversity is the sum of the millions of species and habitats on our planet working together to generate and sustain life as we know it. All living creatures should be treated as important as humans to maintain a healthy ecological balance.

Our wildlife, despite the obvious benefits that healthy nature brings to society, is under serious and on-going threats. It is incumbent on the government and the authors of the national climate change adaptation strategies to critically analyze what can be done to alleviate the current loss of wildlife in our oceans and seas and on the land.

Governments all over the world are signatories of the United Nations Agenda 2030 Sustainable Development, which launched in New York on September the 25-27 2015. The UN 2030 envisages a “world of universal respect for human rights and human dignity, the rule of law, justice, equality, and non-discrimination”.

There are 17 Sustainable Development Goals (SDG ‘s) of which two are important in this article.

* Life below the Water

To Conserve and sustainably use the oceans, seas and marine resources for sustainable development.

To Protect, restore and promote sustainable use of terrestrial ecosystems, sustainably manage forests, combat desertification, and halt and reverse land degradation and halt diversity loss. These two goals are what we shall be basing this article on.

Goal 14. “advocates significantly reducing all kinds of marine pollution and minimizing acidification by 2025, as well as sustainably managing and protecting marine and coastal ecosystems by as early as 2020. It also aims, by 2020, to regulate harvesting in an effective manner and to halt overfishing by ending illegal and unregulated fishing and destructive fishing practices”.

It is important to take cognizance of the fact that everything below the water is also considered wildlife. There is no doubt that wildlife below the water hardly receives the attention that wildlife on the land does, although this attention is increasing exponentially. (governed only by The Law of the Sea) Pollution and over-exploitation of our oceans are huge concerns given the dangerous threat to biodiversity and an increase in plastic waste. Climate change is placing marine ecosystems under increased pressure. Industrial fishing and the commercial use of marine resources is devastating our oceans and the ability to remain sustainable for a growing future human population will not be possible if these problems are not addressed aggressively enough.

Africa has a coastline more 18,950 miles (30,500 km) in length although is shorter than that of Europe because there are few inlets and few large bays or gulfs. Off the coasts of Africa, a number of islands are associated with the continent. The coastal areas have a high level of biodiversity and are one of the biggest international tourist attractions and these zones play a large role in the socio-economic well being of the continent.

The effects of climate change along the coastal zones are the following:

* a rise in the sea levels.

* increased frequency and intensity of storms and floods.

* an increase in droughts.

The consequences of climate change are affecting the numbers of living marine resources and their availability to the fishing communities along the coast. Oceanic wildlife such as rock lobsters, sardines, anchovies and tuna are in decline; if Africa is to achieve its goals of sustainable development by 2030, immediate action needs to be taken to restore wildlife to numbers that will be sustainable for future generations.

Furthermore, the impacts of climate change on marine biodiversity affect the islands where sea birds breed, temperatures influence the sex of hatching turtles and the breeding success of penguins. Climate change is affecting the food chain with fewer sardines and anchovies made available for the other wildlife that feeds on them. We are also seeing a substantial decrease in sea predator numbers.

Besides the huge tourist attractions that the coastal shores bring to Africa and the economic spin-off in creating employment and cash injections into government coffers, certain species of oceanic wildlife- for example-whales, are a key species in the environment. They play an incredible role in the marine ecosystem and in climate change mitigation. Whales bring nutrients up to the surface of the ocean stimulating organisms that absorb CO2. They produce a substance rich in iron and nitrogen, which in turn is nourishment for plankton, the whale’s main dietary intake. Plankton also absorbs CO2 and when it dies it takes stored carbon to the bottom of the ocean where it remains permanently out of circulation. Scientists have indicated that up to one-third of our carbon fossil emissions are absorbed by our oceans and our marine life.

The illegal fishing trawlers and illegal poaching of abalone and other species along the coastlines, dwindling fish populations forcing local communities to sail further and further away from their homes to find fish, the threats to the prehistoric Coelacanth (only found in South African waters off the KwaZulu Natal coast) and many other species and systems of oceanic wildlife which are being threatened by ocean drilling for gas and oil and other human activities, is indeed sending us a clear message.

Given that current climate change is brought about directly through human impact, our ecosystems and natural resources are under threat, and in order to be able to strike a balance going forward, we need to make sure that the wildlife in our oceans and seas are protected and African governments must work towards this end aggressively. If these issues are not dealt with timeously, how will the governments hope to achieve its Sustainable Development Goals for 2020 let alone 2030? The protection of wildlife in biodiversity should not only be about economics but more importantly, it should be about conservation and preservation.

Goal 15 calls for the conservation, restoration and sustainable use of ecosystems, with the aim of halting deforestation, restoring degraded forests and sustainably increasing reforestation by 2020. It also advocates combating desertification by 2030 and restoring land affected by desertification, drought and floods. To protect biodiversity, Goal 15 calls for urgent measures to end poaching and trafficking of protected plant and animal species.

The continuing loss of biodiversity.

Some of the pressures, especially from agriculture, forestry, urban development, illegal poaching, and coal mining, have intensified, resulting in much loss of biodiversity. The decline of wildlife coincides with the degradation of our environment. Our natural heritage continues to disappear, yet we see no concerted efforts or political will to address these issues, which is vital for our survival as humans. Governments need to promote a wider understanding of ecologically sustainable land use with farmers and landowners and the benefits of inclusion of wildlife in creating biodiversity.

In recent decades, human impacts on biodiversity in Africa and across the planet have accelerated and resulted in increased damage to habitats, loss of species, reduced abundance of wildlife and degradation of our environment (air, water, and soils). If we, the current generation, continue to exploit our natural resources, damage our natural habitats, drive species to extinction and pollute our seas and freshwater and soils, future generations will inherit a diminished and degraded environment unfit to support them and provide them with a wide range of benefits to society and the economy.

Our national parks should be placing biodiversity as the number one priority. Through the relentless attacks on wildlife in the national parks, through poaching and illegal hunting of key wildlife species, imbalances have begun manifesting. Climate change has already reared its head by way of increased temperatures, flooding, desertification and drought.

Severe drought conditions in some national parks have benefited some species of wildlife, though at a cost to other species. Over some decades many thousands of species died every time there was a drought. There has to be stricter management and implementation of correct methods to restore rivers. Open, transparent dialogue between neighbouring countries with regards to the health of rivers running through the respective countries is vital. Commercial foresters and farmers tapping into the rivers running through these countries must be engaged with and encouraged to implement stricter measures to maintain healthy river systems. On top of these activities, we have mining and other industries tapping into river systems. Healthy river systems will benefit, not only humans living along these lakes and rivers, (economically and socially) so will the wildlife in the water and on the land. Sadly there are serious challenges in implementing these laws.

The interrelationship between animals, plants, land and humans is important to take note of.

These are only a few examples, indicating how animal and human lives depend on biodiversity. African governments should start promoting a wider concept and understanding of ecologically sustainable use with the inclusion and protection of wildlife systems and in creating and supporting biodiversity, for people to survive.

The following questions need to be asked:

* What actions are being taken by the governments to halt the degradation of natural habitats, and to halt the loss of wildlife in biodiversity?

For example- species such as rhino, elephants, pangolin, lions, vultures, giraffes, leopard, and many more.

* What efforts are being made by the governments to combat poaching and illegal trafficking of protected species?

Since many countries in Africa signed the Agenda 2030 in 2015, poaching has been allowed to increase and not just on land wildlife, but also on oceanic wildlife.

* What achievements have the governments made with regard to increasing the capacity of local communities to benefit from sustainable livelihood opportunities involving wildlife? All wildlife must be protected if the government hopes to achieve goal 15 by 2020.

We have looked at the vital importance of wildlife in creating biodiversity, and how important it is to find balance in wildlife preservation and the ecosystems we need for survival as a human race. These issues are being raised, in most countries on the planet, and due to climate change it is now more important than ever to be able to protect wildlife, (land and sea) to restore their damaged habitats, (land and sea) to end poaching and illegal fauna and flora trade, to stop all deforestation, to clear the oceans of pollution, and to stop unsustainable fishing.

In Africa, we are fortunate to be surrounded by the most abundant nature. It supports our livelihoods and enriches our lives, and there is a close and enduring cultural bond between us and wildlife and their habitats.

The Agenda 2030 is a very ambitious plan, setting high goals which we need to strive towards. Future generations deserve our commitment to being able to leave a world where the building blocks in nature continue to exist and if possible to flourish.

In protecting our wildlife we are guaranteeing the protection of biodiversity which is essential for our own survival.

This site uses Akismet to reduce spam. Learn how your comment data is processed.